An Gof Day: Remembering the Cornish Rebellion of 1497

On Sunday it is An Gof Day - and I'm expecting that most people have never heard of it. An Gof Day celebrates the Cornish Rebellion of 1497 against Henry VII, on the day that its leaders were executed at Tyburn. 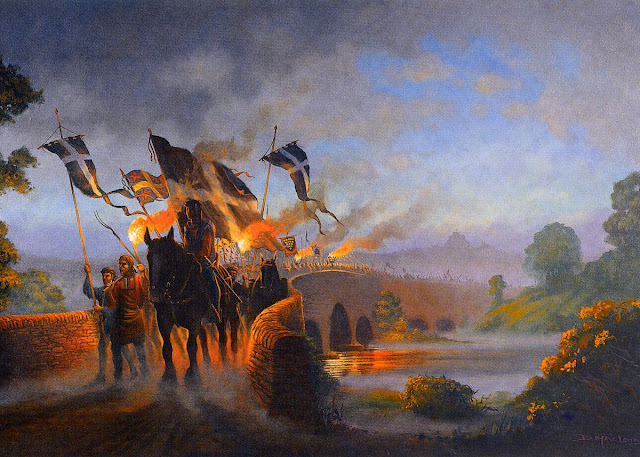 Donald MacLeod's "Crossing the Tamar - The Cornish Rebellion" showing the army of Michael Joseph "An Gof" and Thomas Flamank arriving in England over Polson Bridge in 1497.

Though the rebellion failed, it ultimately led to Cornwall being given the power (under the terms of the Charter of Pardon) to recall its own parliament with significant authority to self-govern and to veto any laws passed by the English parliament in Westminster. These powers exist in law to this day and, having been granted by Henry VII in perpetuity, cannot be lawfully repealed except by the Cornish people themselves (note the distinction between "Cornish people" and "the people of Cornwall") - giving Cornwall an absolutely unique constitutional status.

Historically and legally - and something else not many people are aware of - Cornwall is an ancient Celtic nation and is not part of England (indeed the Cornish were formally granted national minority status in 2015). The boundary between Cornwall and England was defined in 936 by King Æthelstan of England - after he expelled the Cornish from Exeter and fixed Cornwall's eastern boundary at the River Tamar in around 927. Ancient Duchy Charters also acknowledge Cornwall as a place extra-territorial to England subject to its own tax-raising powers.

In the list of his realms, given in his coronation address in 1509, Henry VIII listed England and Cornwall separately - and Elizabeth I stated that she did not rule Cornwall.

Although "county" status was imposed on Cornwall by the English in 1889 (a year after the rest of the England), the Royal Commission on the Constitution (‘Kilbrandon Report’) in 1973 stated this was unlawful and recommended that Cornwall not be referred to as such. This legal position has been reinforced a number of times since - for example in 1988 G.D. Flather QC (Assistant Commissioner for the Boundaries Commission) concluded that while Cornwall is currently administered by England, a legally recognised joining of Cornwall and England does not exist.

In 1989, His Honor Judge Paul Laity (Truro Crown Court) noted that the, "concept of the Duchy rests on the existence of a separate and ancient territory of Cornwall. That separate territory has never been assimilated formally into England."

There were a number of factors that led to the rebellion, but Henry VII's suspension of the Cornish Stannary Parliament in 1496 - and his imposition of crippling taxes to fund his war with Scotland - is seen as the primary motivator. For those unfamiliar with the Cornish Stannary Parliament, this was a legal body that represented the interests of the four Cornish stannaries (responsible for collecting taxes on behalf of the Duchy of Cornwall), that also had the power to pass laws which had effect over the whole of Cornwall in the same way as an Act of Parliament.

Suspension of the stannaries effectively stopped the legal operation of Cornwall's tin-mining industry that was responsible for a significant portion of its economy. The result of this was that Henry's increased taxation burden had a particularly devastating effect on the Cornish. Angered by this the Cornish were encited to armed rebellion by Michael "An Gof" Joseph (a blacksmith from St. Keverne) and Thomas Flamank (a lawyer of Bodmin).

An army was raised to march on London - numbering 15,000 by the time it crossed the Tamar, and picking up additional support on the way through Devon and Somerset. The insurgency hoped to pick up further support nearer to London, but this did not happen.

On 17 June 1497, at the Battle of Deptford Bridge, the Cornish rebels were defeated by Henry's army - and the leaders of the rebellion captured. An Gof and Flamank were sentenced to be hung, drawn and quartered.

Ten days later An Gof and Flamank were executed, although Henry granted them the mercy of a quicker death by hanging only. Following their deaths their bodies were decapitated and quartered. Henry planned to have their limbs displayed around Cornwall, but was advised that he should probably avoid angering the Cornish further and consequently did not do this. Instead their heads were displayed on London Bridge and Flamank's quarters on four of the city gates. Only the quarters of An Gof were sent to be displayed in Devon and Cornwall.

Cornwall continued to suffer greatly under the burden of Henry's taxation policies for a number of years, but in 1508 he forgave the Cornish people. For £1,000 he restored the Stannary Parliament and in the Charter of Pardon, granted it the wide-ranging powers that exist to this day.

So on 27 June we celebrate the fact that Cornwall is not England and say "Meur ras" to the Cornishmen who stood against Henry VII.